I recently had the opportunity to spend the 1st week of March on Dauphin Island, AL.  My family rented a house on the beach there and we took my kiteboarding gear down.  Turned out to be a great decision.  I was down there for 7 days and I kiteboarded 4 of the days.  Probably could’ve rode everyday if I was paying better attention and didn’t take time off.  Our house was situated on a natural bay that formed on the SE end of the island after Hurricane Katrina.  Here is a older map of the island, which is the best I could find on google.  It doesn’t really show the bay on the SE corner though. 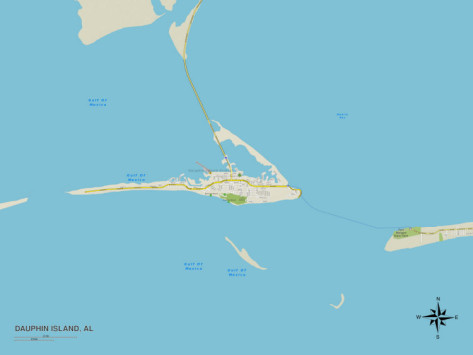 I got into Mobile on Saturday and the forecast was looking good to ride Sunday, so I was pumped up already.  Sunday afternoon came around and the wind picked up around noon to about 11 to 13 knots out of the NW.  The south side of the island didn’t work for this wind direction so I drove down to the far western end and rode at the public beach on the north side.  This was in the intercoastal waters between the mainland and the island.  The wind only held for about 2 hours and it was a struggle during the lulls, so not the best session but I’ll take it when I hadn’t rode in 3 months!  Got my feet wet for the rest of the week.

The forecast for Monday was not looking good, so I took the day off, went to Bayou la Batre, ate some mudbugs and waited for Tuesday.  Tuesday ended up being the best day of the week.  The wind switched around to the SE and blew 20+ knots all morning.  A SE wind allowed me to kite from our house too which was great.  Easy to take breaks and refuel.  I have three kites, a 12m convert, 8m switchblade and a 5.5m nomad.  This morning was an 8m morning!  Some highlights were that I landed my first backroll and started to get the feel for boosting higher and landing consistently in control and with soft landings.  Wednesday turned out to be another great day although the wind was a tad more gusty and dropping below 20 knots in the lulls.  I still rode my 8m all morning though and in the afternoon, shredded some waves outside of the bay in the gulf.  The arm of land that forms the bay I was riding in is only about 20 to 40 yards wide, so when I saw some local kiters out in the gulf I rode across the bay, walked over the land and ripped it up with them.  I was on my 12m now with the wind dropping down to 15 or 16 knots but some of the waves were still 4 or 5 footers.  Unfortunately we didn’t get any pictures of the wave session, but it was a lot of fun.  I’m looking forward to more wave sessions in lake MI.

Thursday was my final day of riding.  Got a 2 hr 12m session in the bay to finish off the week.  Went at it pretty aggressive going for backrolls, but couldn’t quite get em around with the lighter 15 knot wind.  Plenty of wind for boosting though and went big as much as I could.  Also practiced some toe side riding and boosting riding in the goofy footed direction.

Four days out of seven riding was the most I have ever done and I felt it.  Friday was a dreary no wind day and saturday wasn’t good either and I wasn’t complaining.  My arms and abs were spent!  It was a great learning experience though and I feel like trips like this aid in the progression of your skills so much.  Below are a bunch of pictures that my parents took while I was riding.  Starting on the intercoastal side and then over to the bay.  Enjoy!!!