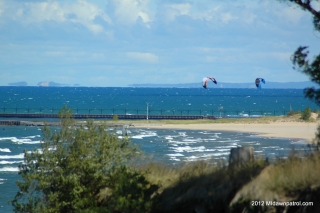 Watching the forecast all week and it was looking like Manistee was going to be the place to be on the 8th of September.  As saturday approached the forecast turned more WNW, so we were expecting nearly onshore wind.  Woke up early Saturday morning and made the drive up from Grand Haven.  Picked up Jimbo and met DP at First St beach.  Known by the northerner’s for it’s waves that wrap around the elbow of the pier.  Rigged my 8m and got out.  Definitely pretty on shore, but good enough wind to get out past the break as the waves didn’t build to much.  Never got the clean waves that a true N wind brings either. 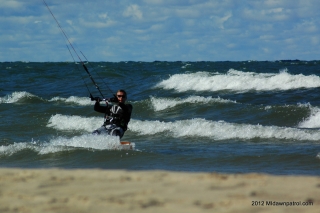 Wind was probably around 20 knots WNW with 3 to 6 footers.  Rode all morning as a couple more riders from up north showed up along with some surfers and SUP’ers.  Ended up doing a downwinder to Jimbo’s house and had some complications.  Jimbo got caught in a cove where the wind let up and his kite dropped.  Got it back in the air and continued on.  It was early afternoon now and the wind was dying out but the waves were still pounding.  Had to walk back to the landing spot. 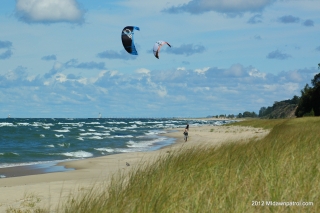 We did discover a few nice breaks on the downwinder however.  Just south of Merkey cliff the waves seemed to form really nice and clean.  Mental note for next time as there wasn’t enough wind left to ride them very much by then.  Definitely worth the trip and good to see the other locals out gettin it too!  Some pics and video from the day…   Credit to little T for taking the pics and picking us up.  🙂  – Jetty